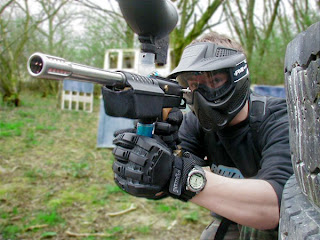 The “Genesis” theory most widely accepted in paintball circles is that forestry workers developed a paint-splatting device to mark trees for fellng. From here, cowboys in the Western states caught on and used the markers on livestock – before finally turning them on one another – with predictable results. The cowboys had inadvertently given birth to what would become a worldwide phenomenon, and a brand new extreme sport.

Millions of people around the world now play paintball on a regular basis; there are even professionals paintpall players who make their living playing paitball at an international level. For most people haowever, paintball remains a fun day-out; something they do once or twice a year, whenever they feel the need for an adrenaline boost.

At its essence, paintball is a competitive game played with the same objective as any other competitive game – to win. It is like a more challenging, high-stakes version of tag, hide-and-seek or capture the flag. Because you shoot at other people (and get shot at!), paintball requires specific equipment (goggles, a gun/marker, pressurised gas and paintballs)

Beyond that, paintball is hard to describe. It can played indoors or out, with as few as two people or as many as 500. A game can last 5 minutes or 24 hours. Its objective might be to take somehting, bring something, find something or to simply be the last person standing.

Depending on the field you play, tactics will be vary from being discreet and stealth and picking your shots carefully, to being loud, fast, and shooting constantly. A paintball game can be different every time, and that is part of the game’s international appeal, but there’s one thing that stays the same: paintball is always an adrenaline rush.