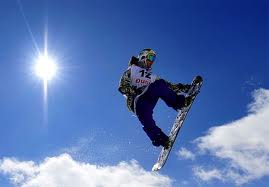 Snowboarding is a winter sport that involves descending a slope that is covered with snow while standing on a board attached to a rider’s feet, using a special boot set onto a mounted bindingIt was developed in the United States in the 1960s to 1970s and became a Winter Olympic Sport in 1998. Since snowboarding’s inception as an established winter sport, it has developed various styles, each with its own specialized equipment and technique. The most common styles today are: free ride, freestyle, and free-carve/race. These styles are used for both recreational and professional snowboarding.
To master freeriding is to seamlessly merge aspects of other snowboarding disciplines such as freestyle and alpine snowboarding into an all-around style – giving you the freedom to make the most of whatever terrain comes your way. Whereas freestyle snowboarding relies on the use of man-made terrain such as jumps, rails and half-pipes, and alpine snowboarding is done on groomed snow – the focus of freeriding is on utilising the random flow of natural terrain. In freestyle, the rider utilizes man-made installations such as rails, jumps, boxes, and innumerable other innovative features to perform tricks such as downed trees or boulders.The intent of freestyle is to use these features to perform a number of aerial or jib tricks. Free-carving takes place on hard packed snow or groomed runs and focuses on the ultimate carving turn, much like traditional skiing. Little or no jumping takes place in this discipline. 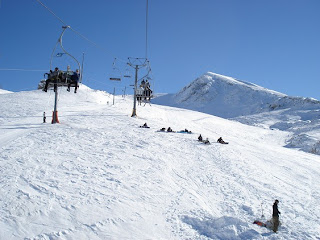 When you think of Greece, I’m tipping you’re thinking of warm holiday beaches, exotic islands with whitewashed villages overlooking deep blue seas, and of course the ancient ruins of the Acropolis. But, did you know that Greece is covered in huge mountains, with Mt Olympus topping out at 2917m above sea level, and that there are in fact twenty or so ski resorts dotted up and down the mainland, and that the ski season typically runs from December through April!
Ski resorts can be found in six regions across the mainland of Greece. In the north: Eastern Macedonia and Thraki; Western and Central Macedonia; centrally: Epirus; Thessalia; Sterea Ellada; and Peloponnesse in the south. Parnassos in the Sterea Ellada region, is the closest, largest and most developed resort, and located only a mere 180km west of Athens (two hours drive) and only twenty minutes from the famous ruins and town of Delphi. Mt Olympus, at 2917m (9570 feet), is the ancient home to Zeus and the eleven other “Olympian” gods (and the Muses) and is located in the Thessalia region near the city of Katerini on the north-east coast. The small ski resort of Elitohori (also called North Selas) is nearby. Also, on the shoulder of Mt Olympus is the small resort of Vrissopoules. However, this two-rope-tow reso 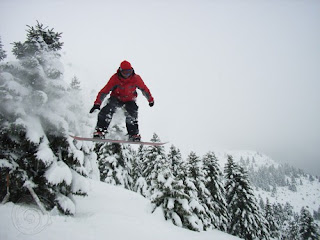 rt is actually a military camp which Greeks are able to visit on weekends. Apparently, permits for non-Greeks to snowboard at Vrissopoules can be obtained from The Ministry of Defence in Athens, however we cannot confirm this. In the north-west region of western Macedonia lies the resort of Vasilitsa, only 50 or so kilometres from the Albanian border, and 230 or so kilometres west of Thessaloniki and only 45km from the major town of Grevena.
The costs are very low compared to the “big” destinations elsewhere. Lift tickets run 15-20 Euro a day, and snowboard rentals run about the same. Many of the lifts are tow lines, but most resorts have some chair lifts as well. The relatively low prices won’t last forever, so enjoy snowboarding in Greece now. For more info on the snowboarding sites, you can visit Winter Sports in Greece post from our site.
Video from YouTube:
Posted by TEO
Editor: Suso