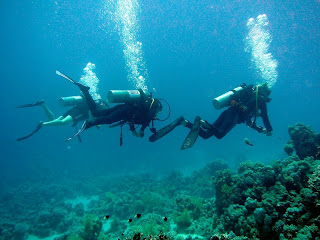 Scuba (Self-Contained Underwater Breathing Apparatus) is an apparatus utilizing a portable supply of compressed gas supplied at a regulated pressured and used for breathing while swimming underwater.
The apparatus is often called “scuba gear”, a “scuba system” or simply “scuba”.
Scuba is also the common name for the sport (also called “diving” or “scuba diving”) which is uses the apparatus for recreational diving.

There are two kinds of scuba equipment: