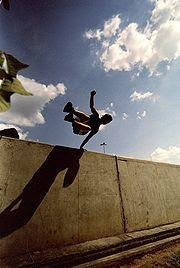 Parkour is an activity with the aim of moving from one point to another as efficiently and quickly as possible, using principally the abilities of the human body. It is meant to help one overcome obstacles, which can be anything in the surrounding environment – from branches and rocks to rails and concrete walls – and can be in both rural and urban areas. Parkour practitioners are reffered to as traceurs or traceuses for females.

Parkour is a physical activity that is difficult to categorize. It is often mis-categorized as a sport or extreme-sport, however, parkour has no set of rules, team work, formal hierarchy, or competitiveness. Most experienced traceurs think of parkour as a discipline closer to martial arts. According to David Belle “the physical aspect of parkour is getting over all the obstacles in your path as you would in an emergency. You want to move in such a way, with any movement, as to help you gain the most ground on someone or something, whether escaping from it or chasing toward it” Thus, when faced with a hostile confrontation with a person, one will be able to speak , fight or flee. As martial arts are a form of training for the fight, parkour is a form of training for the flight. Because of its unique nature, it is often said that parkour is in its own category.