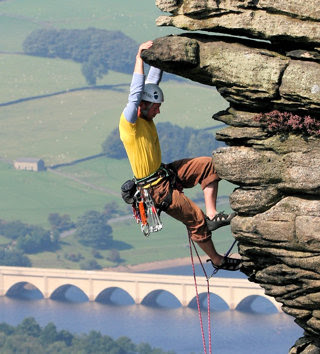 ‘Climbing’ is now classified as a separate category from mountaineering in general, and is usually associated with steep slopes and peaks, to be negotiated with specialized techniques and equipment. Then there are the sub-categories of Free Climbing and Aid Climbing.

In the first, though the same equipment is used as in the second (ropes, carbineres, bolts, etc.),it is not depended on to negotiate the climb, but used only as something to fall back on, so to speak, with all the harder work done by finding footholds and handholds.

Then there is ‘sport climbing’, which uses no aids whatsoever, though it can be done in a gym as well as on actual rock, with very standardized techniques used by everyone.

As with mountaineering in general, climbing really became popular in Greece in the 1980s, almost four decades after the first climbing team was formed, and gained even more popularity in the 1990s, with several grade IX routes established (IX on a scale up to X).

There are many mountaineering clubs in Greece with courses in climbing, as well as private schools run by professional guides, with practice in using climbing equipment in chosen sites.