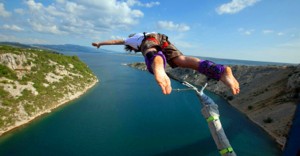 As a sport for exhilarating emotions, bungy (or bungee) jumping has acquired its own fans in Greece. It only became known a few years ago as among others, there are not enough high buildings or large bridges to attract jumpers who want to create their own personal record. However, the desire of many young persons to live this unique feeling caused by jumping into the void was the motivating force for the creation of specialized companies that train people in bungy jumping.

The most important and highly visited bungee spots in Greece is the bridge of Chalkida, about 100 km to the north of Athens, and the Corinth Channel, a bridge 100m high. So many people go to Greece and the Greek Islands for their summer vacasions thinking of blue skies, white buildings, blue blue seas, wonderful beaches, great food, Zorba’s Dance… hmm, I could go on for ever, but the thought of an extreme sport at the same time might not have occurred to you. However, it might interest you to know that the second highest bridge-bungy jump in Europe is also here… The Liquid Bungy Jump off the Aradaina Bridge, Sfakia, 85 km south west of Chania (or Hania), Crete.

This old military bridge is the highest one in Greece and the Balkans and links the edges of a wild canyon. Liquid Bungy operated for the first time in Greece in 1999 and since 2004 on the Aradaina Bridge, but please note that it is only open during the summer months and weekends only. Pretty long opening hours though – from 12 a.m. to dawn! But if you can put your own group together of a minimum of 10 people you can arrange to jump whenever you want – during the summer. By September this jump will be closed again…

Here is a list of companies that organize bungy in Greece: