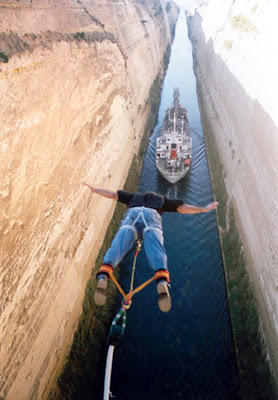 The origins of this sport are quite fascinating. A National Geographic team travelled to a South Pacific island in 1955 (Pentecost by name, though certain not the one the natives used!), where they documented an unusual ceremony in which the natives tied creeping vines to their ankles and then jumped out of trees, saved from hitting the ground head first by the vines, a ceremony based on a myth in which a wife tricked her unsavory husband who was pursuing her by doing just that, with the unsuspecting husband plummeting to his death.

Fifteen years later, another National Geographic staff member visited the islands and performed this ceremony with the natives, being the first westerner to do so.

Hence, bungee-jumping! A bungee, for those who don’t already know, usually referred to as a ‘bungee cord’, is an elastic rope with hooks on either end used to hold things like luggage or parcels, or whatever, closed. The modern sport (inspired by the National Geographic articles) was launched (so to speak) in 1979, when members of the Dangerous Sport Club at England’s Oxford University jumped off of a 75 meter (246 foot) bridge in Bristol, dressed in dinner jackets. That was just the beginning, with a New Zealander jumping off the Eiffel Tower in 1987.

There are now two systems, from New Zealand and the United States, the latter with extra ropes and accessories. In either case the rope absorbs the impact of the fall and pulls the jumper back up in a series of yo-like oscillations. Though the sport has been made safe with regulated facilities operated by professional crews, there are some daredevil jumpers who have gotten their adrenaline rushes by jumping out of helicopters and off of towers. Relatively new to Greece, bungee jumping has spawned some agencies and trained crews, with favorite locations including the Corinth Canal, the bungee facility open from April through November on all weekends, though open also on weekdays during peak tourist season (June through September).